When we speak of lasers, we think about coherent light, very short bandwidth and power. These caractéristiques needs to be taken into account when using optics with laser beams. Below you’ll find guidelines for the selection of laser optics. 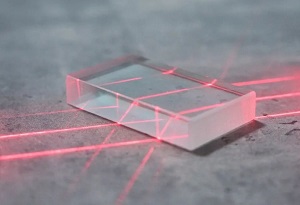 What are laser optics ?

Laser optics are specific optical elements that are designed to be used for laser applications. Light beam emitted from a laser is usually more intense than random light emission and uni-directional.

In order to focus, transmit, filter or redirect a laser beam, you need specific optics that are designed for the purpose and most of the time to the kind of laser that will be used too.  Elements for a CW (Continuous Wave) laser of pulse laser may be different, same a component used for a 266nm laser may not fit for a 1064nm laser.

In a nutshell, laser optics are components designed for a specific usage with a specific laser.

Damage threshold or LIDT (Laser Induced Damage Threshold) is the maximum amount of energy (usually expressed in J/cm2) that can be handled by an optical element without deteriorating.

Whereas LIDT is critical for high power laser application, its definition and measurement are not very straightforward.  As laser are usually monochromatic a LIDT should be defined for a specific wavelength, laser optics are designed for an application and will not react in the same way for other applications.  Also it should be specified if the laser is CW or Pulsed (with the pulse rate).

How to optimize laser optics LIDT ?

Damage threshold is linked with the amount of energy that is absorbed by an element, a virtual element with 100% transmission would not have LIDT. In order to be the closer to the 100% transmission laser optics have to be manufactured and selected following different elements :

How to measure laser optics LIDT ?

Measuring LIDT is not straightforward, it is a destructive testing and needs expensive Equipment.

The process is to apply a laser beam on the optic to be tested and to visually analyse the eventual damage. Several tests can be conducted on a same optics in order to fine tune the LIDT value.

As explained above a LIDT is linked to a specific kind of laser, so to be able to test a LIDT one should be able to test it with a corresponding laser device, there are rules of thumb to extrapolate LIDT from one laser type to an other but they are not very accurate and cannot used as a basis for an optical design.

As the testing itself is destructive testing and the laser optics are neither very cheap, LIDT is often guarantied by the respect of other specifications (material, type of coating, polishing, cleanliness) .

Which optical materials for laser optics ?

Some example of materials used in laser optics:

Different kind of laser optics and their specific usage: