When we speak of parabola the first thing that come to our mind is the “dish” seen everywhere on houses roof to connect to satellite TV.  In Optics, parabolic components are also used almost in the same way to collect other type of radiations from the optical spectrum. In below guide you’ll learn everything you need to know on parabolic mirrors.

Definition of a parabolic mirror

A parabolic mirror is a mirror which the shape of its optical surface is defined by a parabolic function. They are almost always concave and used for either focusing collimated light or collimate a light source output beams (also called reflectors or collimators).  Parabolic mirrors can be provided with a through hole at their center which can be used for reference or introducing a light source. 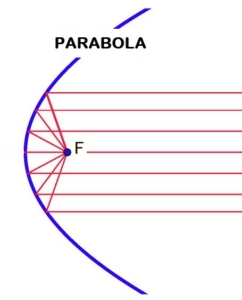 Off-axis parabolic mirrors (OAP) are a cross section of a parent parabola cut along the symmetric axis in order to loose the symmetry and that the focusing point can be reach easily outside the optical element (see below illustration). Off-axis mirrors should be used within a specific angle range that is specified by manufacturer otherwise focusing will not react as expected. 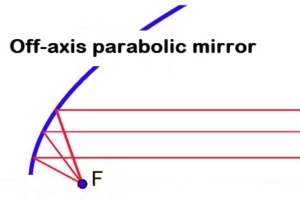 Example of an off-axis parabolic mirror

There is two main advantages

Usual coatings are gold, silver or aluminium, but dielectric coating is also available for narrower working spectrum, for example in laser applications.

Parabolic mirrors are common in Astronomy, lasers, microscopy, lighting and spectroscopy. They are used with visible light but also on UV and IR spectrum.

Where to buy parabolic mirrors ?

Due to their shape complexity parabolic mirrors cannot be found in every precision optics manufacturer, supplier should be able to machine complex shape either by CNC or Diamond head turning.

Don’t hesitate to contact SINOPTIX for your parabolic mirror requests.

Waveplate for optics : a complete guide
Scroll to top