Silicon is a famous element for being associated with with the world’s high-tech hub the Silicon Valley in California, USA. The reference to silicon is due to his dielectric properties that are widely used in the semi-conductor industry. However, in this guide we will focus on optical properties of Silicon and its usage as raw material for optical component. 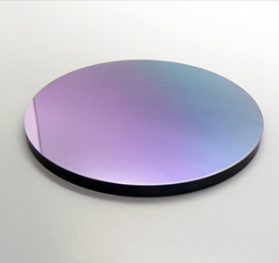 Why silicon is used in optics ?

Silicon, atomic number 14 element is a widely available element on earth as about 30% of the earth crust is made of it. It has very good optical properties in the MID-IR range. MID-IR wavelength are useful for many imaging, biomedical and military applications.

Moreover silicon is a rather hard material resistant to many external constraints and not too much temperature sensitive.

Finally, the fact that Si material is virtually non-transparent to wavelengths in the visible is an advantage to filter non necessary wavelength signal when working on the MID-IR.

What are Silicon properties ?

Below is the non coated transmission curve of a silicon window, transmission can be greatly improved between 3 to 5 µm by adding Anti-reflect coating.

What are the type of optical component that can be made in Silicon ?

Silicon optics are optical elements such as lenses, windows, domes that are used in the infrared spectral range. Silicon is also a common substrat for micro-optics components usually integrated in opto-electronics assemblies.

Optical silicon windows optical properties are usually enhanced with Anti-reflect coatings and their mechanical protection can be strengthened by adding a DLC (Diamond Like Carbon) layer.

IR optics : how to choose between Silicon and Germanium?

In IR optics, germanium and silicon are both very popular substrate solution, here are their differences.

First, in term of pricing while raw Germanium raw material is much more expensive than raw Silicon, it is not so true for optical grade materials. The material price difference can also be compensated by the fact that the silicon is harder therefore more difficult to process. The more the part is complex (lenses, aspheres) the more the chance that the Si optical component will be more expensive than its Ge equivalent.

Second, their optimum usage optical range are different (and complementary), whereas silicon will have a very good transmission between 3 and 5 µm, germanium transmission will be optimum between 8 and 12µm.

Fourth, Germanium have a much higher refractive index (4.05) than silicon (2.5) which is interesting for designing lenses with wider field of view.

Finally, due to its wider transmission range, germanium is to be preferred for C02 laser applications.

How to find a good supplier for silicon optics ?

Silicon optical components are made by precision optical suppliers usually focusing on IR optics. Due to high value of the raw material, specialization enables these companies to have dedicated tools, less pressure on the stocks and lower risks of non-quality rejection.

Don’t hesitate to ask SINOPTIX for more details or quote request for your component:

Other ressources on optics: