What are spherical lenses used for?

Spherical lens are used in applications where light will be converged or diverged to form a smaller or bigger image of an object / field of view.

For example on a camera, lenses are used to focus the image of an object which is close or far from the device on a sensor (often a CMOS) of several mm wide. If you are taking a picture of a building, this building image will be shrink at exact proportions from several meters to several mm and transcribe into digital information so you would be ablet to print it.

On the opposite on a microscope the lens will enlarge a very small object to a wider image that can be seen either by raw eye on a eye piece or by a digital sensor.

What are the types of spherical lenses?

Spherical lenses are usually defined by the shape of their two surfaces, which is mix of flat, concave, and convex.

Illustration 1 : a Plano-concave lens (PCV lens), with a flat surface and a spherical concave surface (with radius of curvature of 140mm in this example.

Illustration 2 : a plano-convex lens (PCX lens), with a flat surface on the right and a spherical convex surface on the left with a radius of curvature of 36mm in this example. 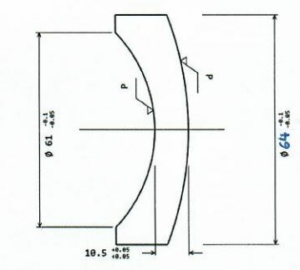 Illustration 3:  meniscus lens, thin lens with with a concave spherical surface on the left and a spherical concave surface of the on the right.

Illustration 4: a biconvex lens with two surface of spherical convex surface with a radius of curvature of 80,5mm for both sides in this example.

Illustration 5 : a biconcave lens with two spherical concave surfaces and a center thickness of 1,8mm in this example.

How spherical lenses are made?

Normal process for manufacturing of a spherical lens is as below :

Which optical material can be used for spherical lens?

Most optical material can be used to manufacture a spherical lens, choice of material should be made according to below criteria :

In case no specific constraint, we advise to design lens with N-BK7 ( Schott)/ HK9L (CDGM) optical glass, they are widely available and relatively cheap.

How much does a spherical lens cost?

Spherical lens can be found from a wide range from less than one USD to several thousand USD per lens. Below are the parameters that impact a lens price :

If you are looking for a specific price for your project don’t hesitate to request for a free quotation :

The focal point of a spherical lens is the point on the optical axis at which an incident bundle of light rays will converge to focus.

According to the shape of the surfaces, a spherical lens can be diverging or converging.

u : is the distance of the object to the center of the lens

v: is the distance of the image to the center of the lens

f: is the focal length.

For example with an objet at the infinity, we will have 1/u that tend toward 0, so 1/v=1/f so v=f, the image will form at the focal length.

A spherical lens is defined by it’s optical power which is inverse equivalent to the focal length, meaning that the closer to the lens the focal point is the higher the power of the length.

Where P is the power of the lens and f the focal length.

The simulation of a spherical lens focal length can be done based on the refractive index of the material (Snell law), thickness of the lens and radius of curvature. As the calculus is little complicated we advise spherical lens users to use simulation software (like Zemax) to get a reliable value.

An optical lens usually have 2 types of tolerancing :